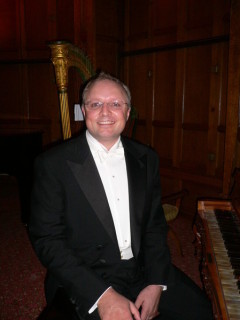 Peter Hicks was born in the North East of England, not far from Newcastle upon Tyne, and started singing in the local church choir and having piano lessons at the age of seven. His musical interests later expanded to include the oboe, and he was to win prizes for his oboe and piano playing at music festivals in both Hexham and Morpeth in 1982. It was during this period that he taught himself the organ and became organist and choirmaster of the parish church in Riding Mill, Northumberland.

Over his long university career (BA Hons Classics, University College London / PhD, History of the text of Theocritus, Saint John's College, Cambridge, 1982-1992), he was musical director of a show taken to the Edinburgh Fringe, he sang in the choir of the university church of Christ the King, London, under Alan Wilson, played the oboe with the orchestra of Queen Mary's College. He then sang in Saint John's College Chapel Choir, Cambridge, under George Guest. In Cambridge he likewise sang with The Gentlemen of St John's and The Bach Society. Moving to take up a scholarship at Collegio Ghislieri, Pavia, Italy, he directed the choir of the Anglican chaplaincy in Milan and sang with the 'Heinrich Strickler' madrigal group, winning equal first prize in the Marenzio Competition, Coccaglio, Italy, 1990.

Coming to France in 1991, he became director of music at Saint George's Paris and at the same pursued a career as director, soloist and ensemble singer, appearing either in, or at the head of, various groups, notably, the Maîtrise de Caen, the Chanteurs Hicks at Euro-Disney, Rennes-based group Arsis, and as a soloist in the mediaeval "opera", The Play of Daniel, performed in Paris, Athens, and Tokyo. Since 2002, he has also been director of the choral society, Musicanti.

Concerts as a pianist/accompanist